Shimonita is a small basin, 2 km from east to west and 1.5 km from north to south, surrounded by mountains.
The Kanto Plain stretches downstream from Mayama Kabura River to the eastern part of Shimonita, and the mountains on the Gunma-Nagano border are located in the western part.

People have lived in Shimonita since the Paleolithic Age. The Shimonita Road, a side road of the Nakasendo Highway, flourished as a road for common people and as a place to connect Kamishu (Gunma Prefecture) and Shinshu (Nagano Prefecture), and was also a place of human and cultural exchange.

Suwa Shrine, famous for its sculptures that remain in the town, and the scars from the Shimonita War that took place at the end of the Edo period can be seen in various parts of the town, giving visitors a sense of history. The Median Tectonic Line, which divides the Japanese archipelago into two halves from east to west, runs through the town, and the area is a geological treasure trove of strata and rocks from various eras.

Starting from Shimonita Station, let’s take a stroll through the sights of Shimonita’s town center. 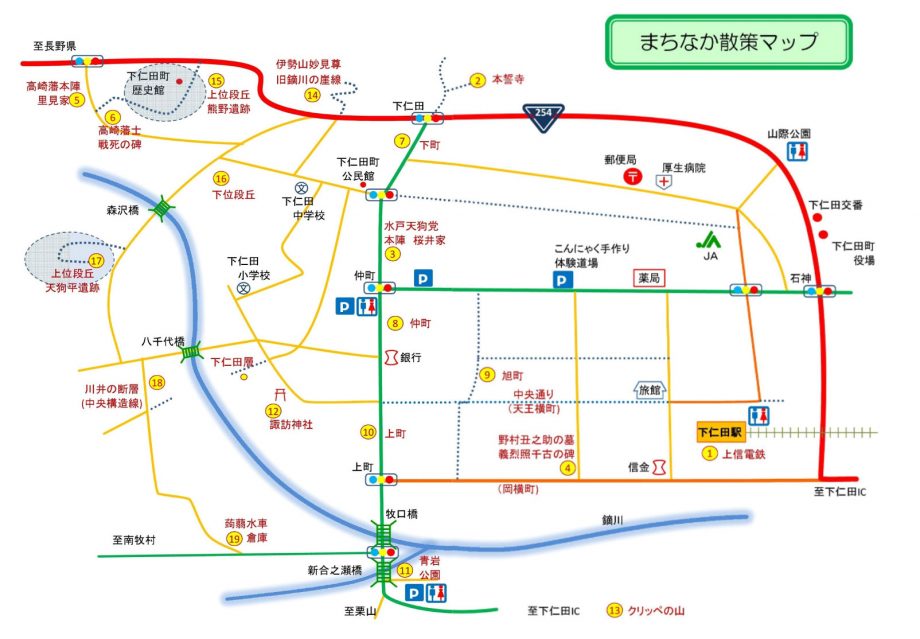 Compared to the Nakasendo, which was developed as a major highway and included the Usui Pass with its steep gradients and the Usui Sekisho, a strictly enforced barrier, the Wami Pass was a relatively gentle road used by many people as a road for commoners and merchants.

In addition, there were several pass roads connecting Shimonita and Shinshu, which developed as a major passageway for the exchange of goods between East and West.