1. The sea to land cataclysm that created “rootless mountains

The mountains visible from the town have a bumpy shape as depicted in an old tale. The “Rootless Mountains (Klippe)” ,selected as one of the 100 best geological features in Japan, were formed when rocks on the eastern edge of the Asian continent moved up to the Pacific Ocean side.

The area around the cliffs is rich in high-quality limestone from the ocean, which was heavily utilized. The stony land along the mountains was also used for konjac cultivation.

The orange area is the strata that have been moved.

Traces of the Great Earth Shift 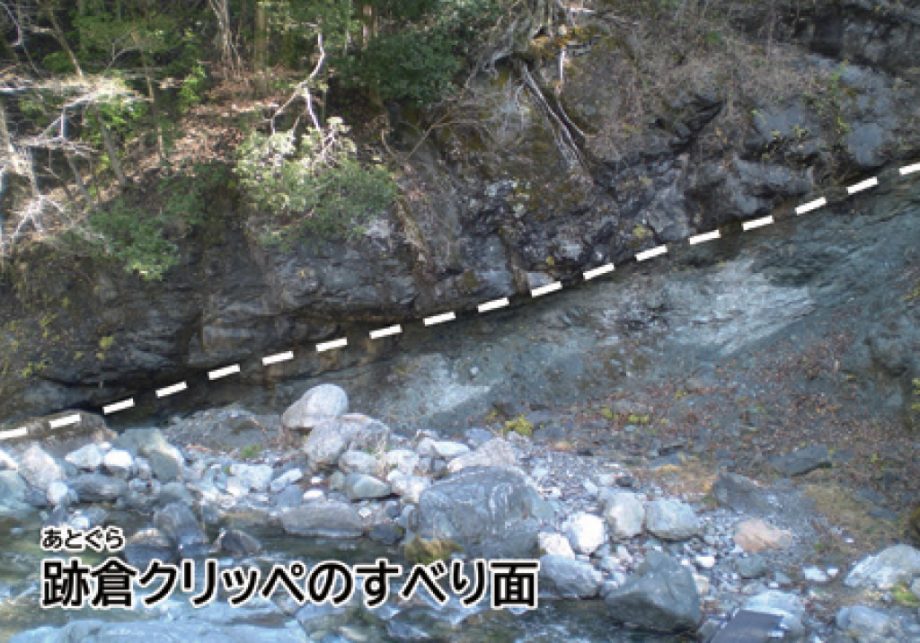 This is the boundary when the strata above have moved. The bedrock appears to have been rubbed when the bedrock moved. 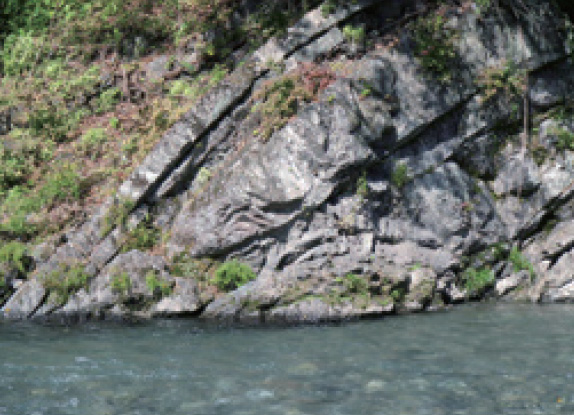 It appears as if the earth has moved and the strata have been pushed and bent.

One of the rocks that make up the cliffs, the oldest type of granitic rock in Shimonita, forms a waterfall with a drop of 40 m. The waterfall is located on the south side of the cliff.

Nearby is Fudo Myoo, a statue of Fudo Myoo enshrined in the temple.

Rocks that make up the ground of rootless mountains 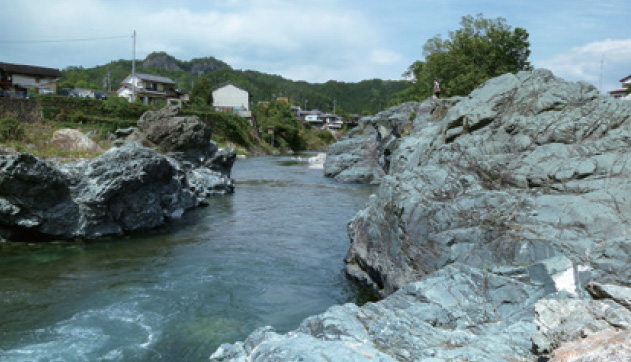 The park is characterized by green rock pavements formed by undersea volcanic eruptions from long ago. At the confluence of the Kabura and Nammoku Rivers, many different colors and types of rocks can be seen on the riverbanks. 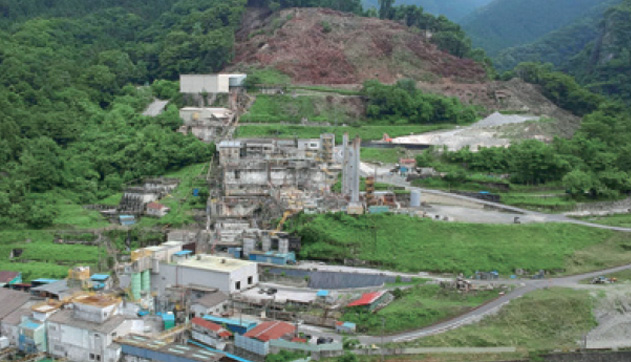 This plant produces calcium carbonate from limestone. Limestone is a remnant of ancient coral reefs.
Currently, there is no mining in Shimonita.

*Visitors can only view the factory from the outside, and cannot enter the factory.

Mt. Arafune is an old volcano located on the border of Gunma and Nagano Prefectures.

The river flows across the mountain to the Pacific Ocean on the east side and to the Sea of Japan on the west side.

Mt. Myogi is also an old volcano with many strange rock formations such as a stone gate, and is designated as a national scenic beauty spot and one of the three most scenic spots in Japan.

The nearby Kozu Farm is the “oldest Western-style farm in Japan” that utilizes a vast flat surface caused by a landslide. 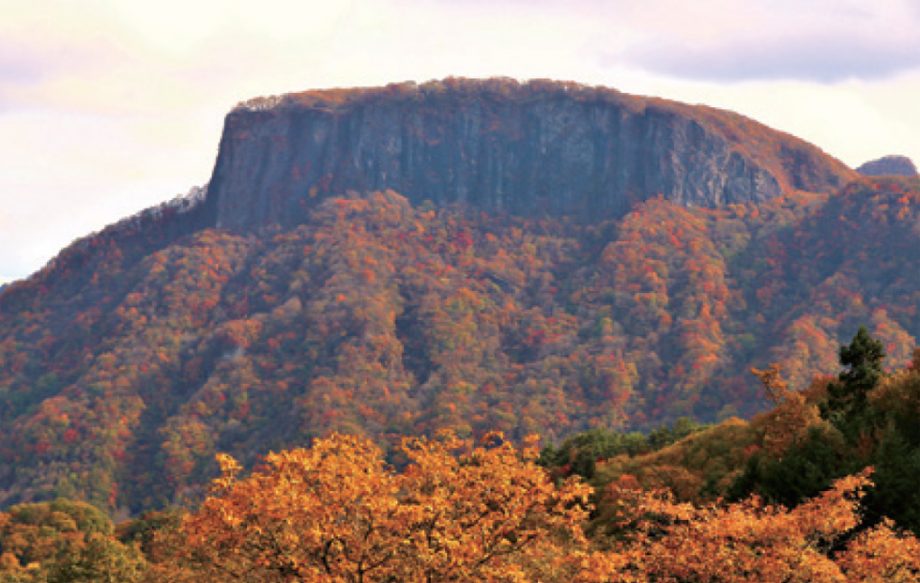 This is a remnant of lava that erupted during former large-scale volcanic activity. It is one of the 200 most famous mountains in Japan and is popular among climbers.

Mt. Myogi together with Mt. Akagi and Mt. Haruna is known as one of the three mountains of Jomo and its natural beauty, such as stone gate groups, cannon rock, and candle rock, impresses visitors with its deep, flat 1.2-km summit. 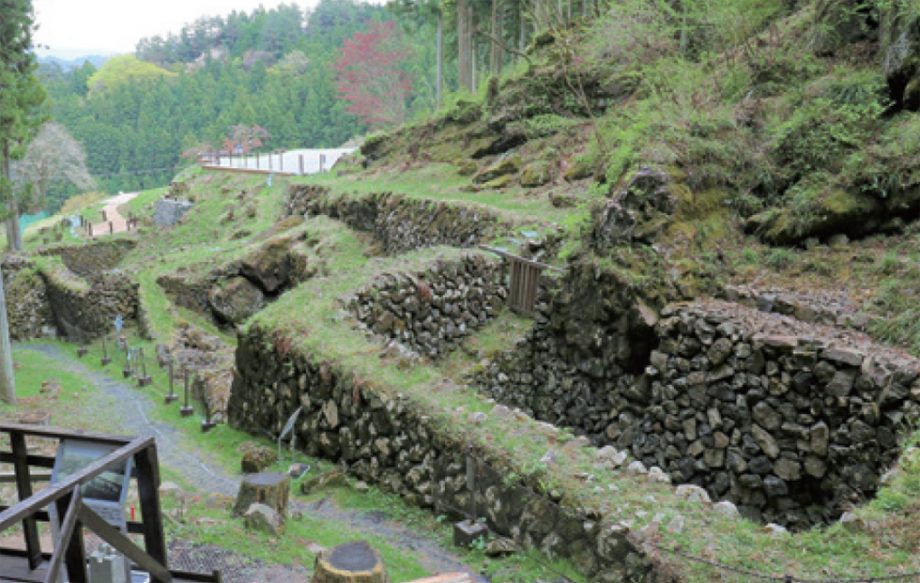 World Cultural Heritage. Cold winds still blow from the rocky terrain formed by the collapse of hard magma-solidified rocks. From the Meiji period to the early Showa period, it was one of the largest refrigeration facilities for silkworms in Japan, and together with the Tomioka Silk Mill, it greatly supported the Japanese silk. 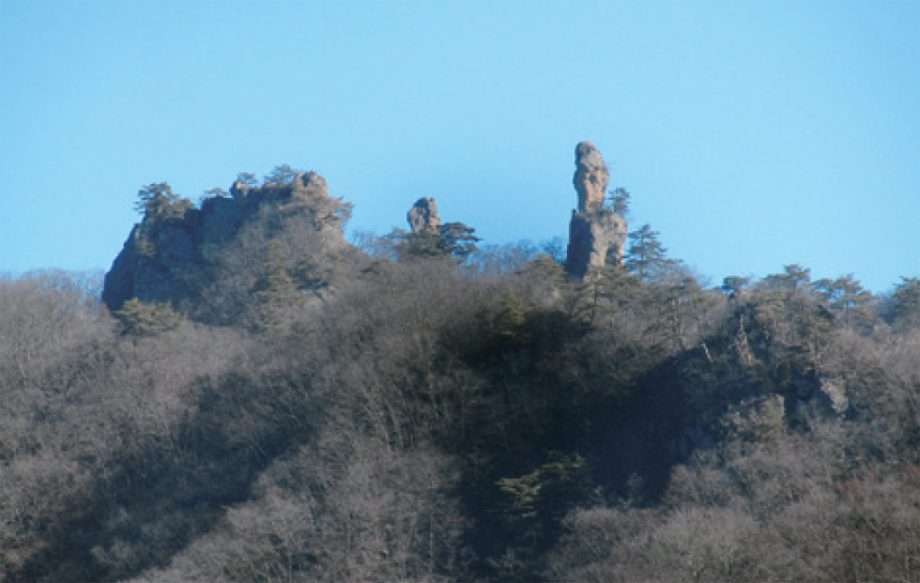 The rightmost rock peak is called “Baa (grandma)” and the next is “Jii (grandpa)”, and the group of rock peaks on the left is called “Kotatsu. The volcanic eruptions have been carved by wind and rain over a long period of time, resulting in the oddly shaped rocks. 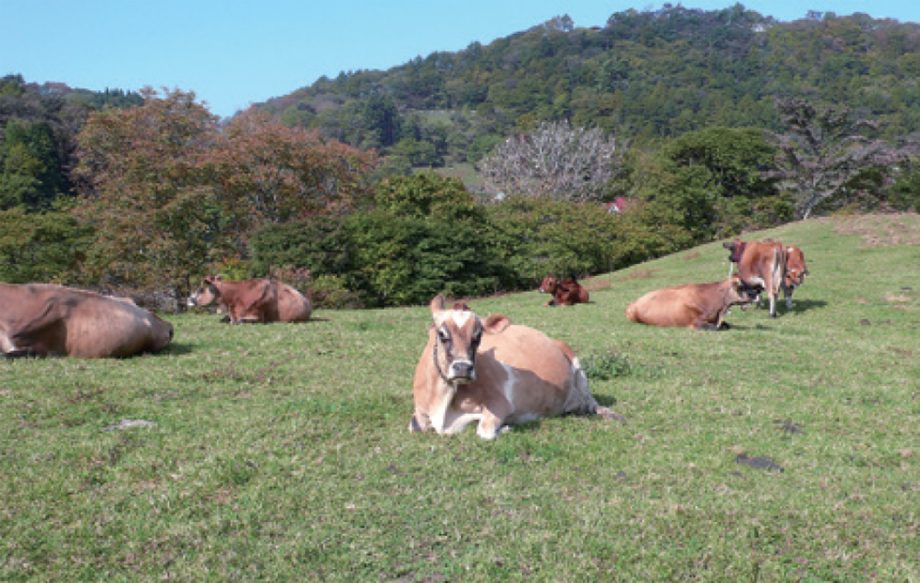 Japan’s oldest Western-style dairy farm. It produces and sells high quality dairy products made from fresh raw milk of Jersey cows. The daily procession of cows in the pasture is a sight to behold. 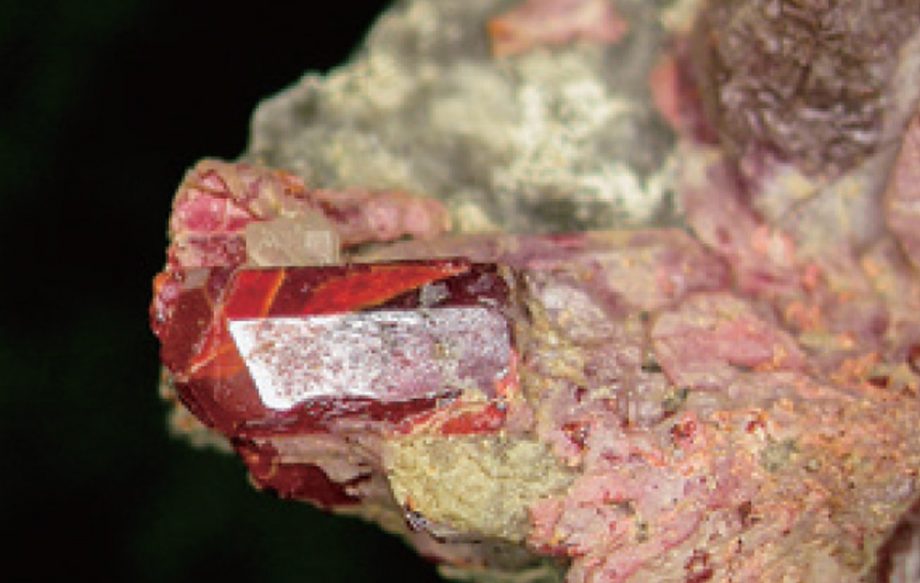 (Nishinomaki Mine Site)
This is a rare mineral containing arsenic formed by magma activity.
It cannot be collected because it is privately owned. It is toxic and requires caution. 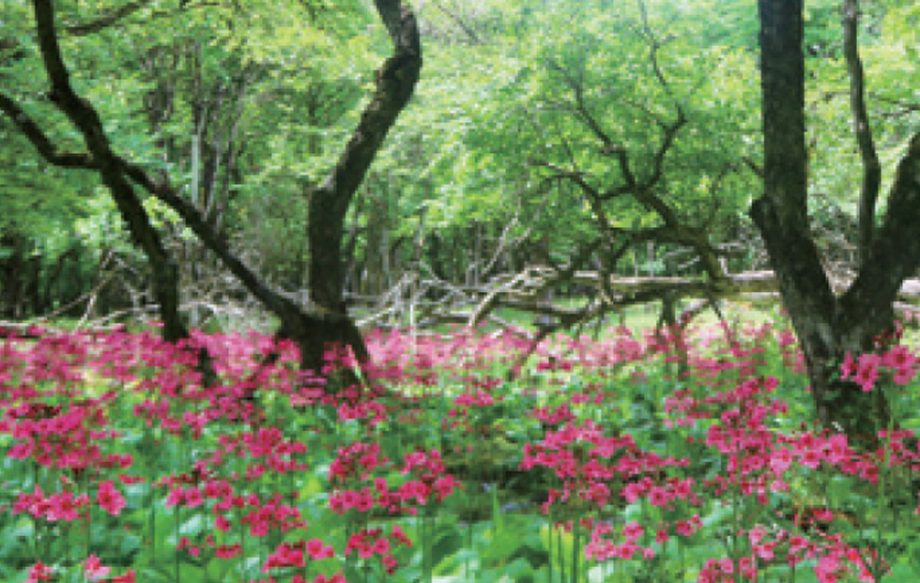 The summit is flat for about 1.2 km. A forest of Quercus serrata and a marshland with native plants such as Japanese osmanthus and oatara kou.

3. Intersection of East and West cultures

Shimonita Town is located in the valley of the Kabura River, which flows from east to west. The “Road of Shimonita” connecting Bushu/Joshu and Shinshu was a pathway for obsidian from Shinshu in the Stone Age. After the modern period, rice from Shinshu, whetstones from Nammoku, and Shimonita’s specialty hemp, silk, paper, and lime were also transported. The local specialty, Negi and konnyaku, have been loved by people from all over the region.

The only visible Median Tectonic Line in Kanto

The Median Tectonic Line (a major fault), which crosses the Japanese archipelago from east to west, can be seen in the riverbed on the opposite bank of Suwa Shrine in the town. This fault created the valley of the Kabura River from east to west. 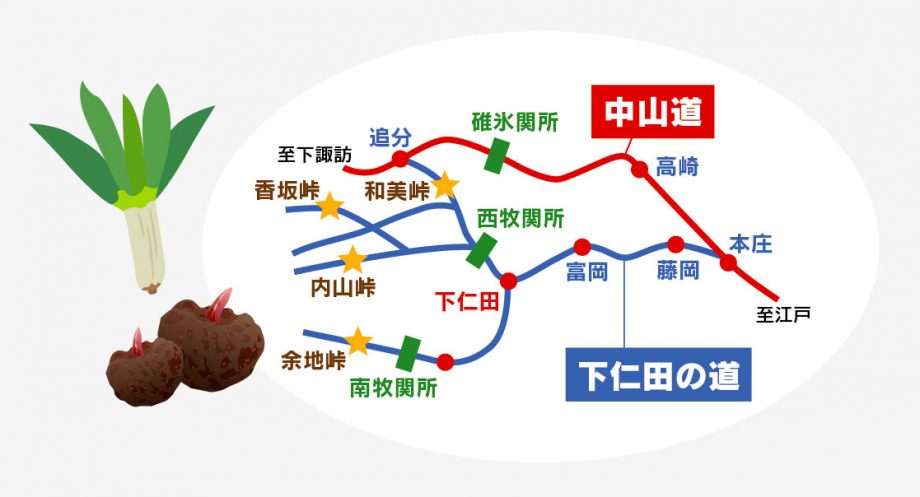 The Mayama area has two terraces. Many ruins from the primitive period have been found on the upper terrace, and a mountain castle was built in the Warring States Period. The area is a major production center for Shimonita-negis, a specialty of the area.

A hydrangea garden utilizing the terraced cliffs of the Umayama Hills, where a hydrangea festival is held from mid-June to early July.

The valley shape of Shimonita was suitable for konnyaku flour milling using a water wheel. Even today, when electric power has been replaced, konjac sweet potatoes from all over the country gather here as one of the leading konnyaku flour processing areas in Japan.

Sukiyaki with specialties such as Shimonita-negis, konnyaku, and shiitake mushrooms is a popular school lunch menu item.

The Joshin Electric Railway opened between Takasaki and Shimonita in 1897 to transport abundant resources. The area around the station still retains a retro Showa-era town

The shrine pavilion is gorgeous, with magnificent carvings on the pillars and beams. The autumn festival has a long history dating back to the Tenpo era, and is a grand affair with a parade of portable shrines and floats.

Historical sites of the Shimonita War

In Shimonita at the end of the Edo period, there was a battle between the Mito Tengu party and the Takasaki clan. The remains of both camps and a cemetery can still be seen in the town.